Bobby Tail Duo Live at Westchester Burger Mount Kisco with Samuel Adams beer specials. Paying homage to the great voices of the 60’s through the 80’s. 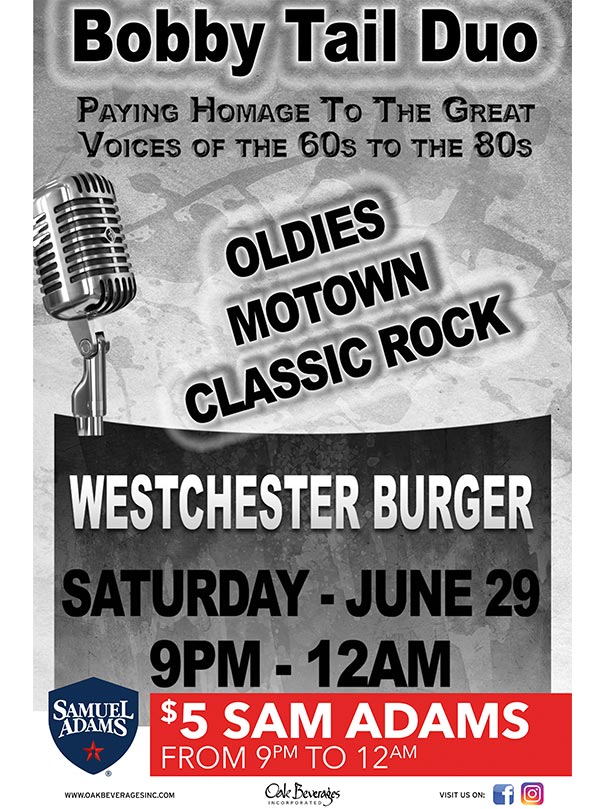 Setting standards since 1984, this is where it all began.

When Jim Koch left his corporate job to start a brewery, people told him he was crazy. But after tasting that first batch of Samuel Adams Boston Lager in his kitchen, he knew he had something that just might prove his doubters wrong.

Westchester Burger Company has been serving specialty burgers to hungry Westchester area residents in White Plains (since 2010), Rye Brook (since 2011) and now Mt. Kisco (since March 2012) West Nyack ( since 2013).

“I’ve been working on it for about three years now, at least three years,” DiFeo said. “I love burgers personally, it is just a thought I had for a long time, to do something unique and different and that’s how I came up with this concept.”

After opening successful restaurants Graziella’s and Blue with family members, DiFeo set out on his own with the Westchester Burger Company (WBC). So far the venture has been a resounding success, as the West Harrison resident’s burger has already piled up some local awards and has customers buzzing.

The Original WBC Burger is comprised of 10 ounces of prime beef, blanketed in smoked mozzarella, garnished with frisse, tomato and pickles and slathered in DiFeo’s own secret WBC sauce. Already the burger has been named in Westchester Magazine‘s best of Westchester and was voted the magazine’s choice for best burger in the Hudson Valley. Recently it was also nominated for the award of best burger in New York on NYBeef.org.

DiFeo is the brains behind the WBC burger without any extensive training in the culinary arts. He has created his work of art by trial and error and long hours in the kitchen.

“I’ve been in this business my whole life,” DiFeo said. “I took a little bit of a course at Manhattanville back in the day, but everything is basically myself and the school of hard knocks.”

DiFeo learned his way around a kitchen from his mother, a chef for 37 years herself, while growing up in Silver Lake. He says that so far he has been lucky enough to not suffer any hefty failures, but he has learned from his mistakes and become better for them.

“Failures are what make you better actually,” DiFeo said. “You make your mistakes and you learn from your mistakes. I think now I am on my A-game and I figured it all out. But there is always something else to learn.”

When scouting locations for the restaurant, DiFeo came across the current address at 106 Westchester Avenue and figured it would be the perfect spot for him to launch his brand. Since he has driven through the area countless times, he figured Westchester Avenue would be an ideal location—so far it has worked out well.