Buy “1” Pint of Guinness Draught and get a Guinness Gravity Glass. 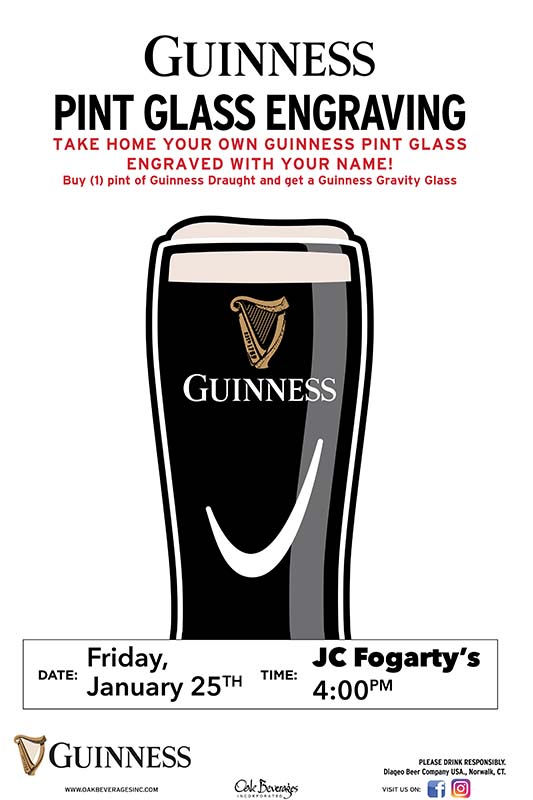 It takes bold brewers to brew bold beers. Those prepared to go to lengths that others wouldn’t to perfect their craft. In 1759, Arthur Guinness took out a 9000-year lease on a brewery; our brewers then brought you the blackest beer with the most colorful flavor, and braved the perils of the high seas to transport it across the globe. The pioneering methods of our predecessors have been handed down and tirelessly advanced from generation to generation and they never stop evolving. Which is just as well, as we’ve got a whole lot more beer to brew.

John is originally from Holy-Cross, County Tipperary, Ireland and immigrated to the United States in 1971. In 1972 John met his wife Mary Harte, when she arrived from Feakle, County Clare, Ireland.  John and Mary’s first Parish was St. Gabriel’s In New Rochelle, New York.

John has been a successful businessman in the New York area for over 35 years and is the proprietor of J.C. Fogarty’s in Bronxville, New York.  John, a long-standing member of the Irish community, has been a great supporter of the areas Irish causes and many other local groups.  He has also been a member of the Tipperary Men’s Association since 1972.

1726 – Castle Fogarty in the County of Tipperary. And in Walker’s History of the Irish Bards there is an engraving of an Irish harp, made in 1726, by John Kelly, which was in the possession of Mr. Jonathan Hehir of Limerick..