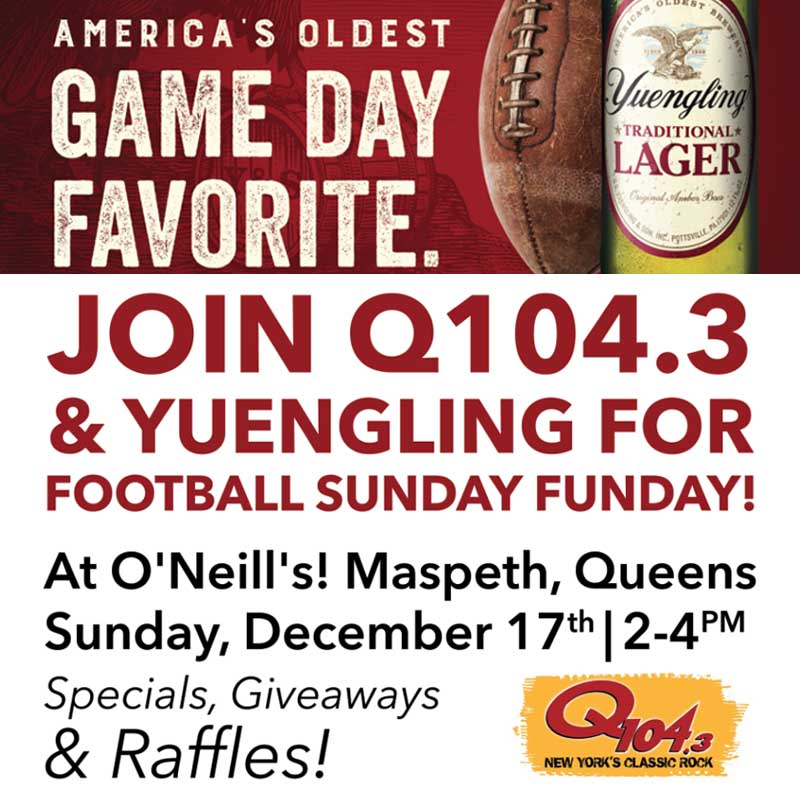 Yuengling
D. G. Yuengling & Son is the oldest operating brewing company in the United States, established in 1829. It is one of the largest breweries by volume in the country. Based on sales in 2011, Yuengling was tied with the Boston Beer Company, maker of Samuel Adams brands, as the largest American-owned brewery. Its headquarters are in Pottsville, Pennsylvania. Yuengling produces about 2.8 million barrels annually, operating two Pennsylvania facilities and a brewery in Tampa, Florida.

O’Neill’s Maspeth NY first opened its doors as a restaurant on December 5, 1933, the day Prohibition ended. Originally founded as the Plateau Tavern by George O’Neill, Sr., the establishment has now been family owned and operated for 80 years. As O’NEILL’S thrived in the days following Prohibition, its most significant growth began when current proprietor George O’Neill, Jr. returned from a 1956 tour of duty as a US Army cook in Hawaii to join his father behind the bar and turn the establishment into a full-fledged restaurant. Generations later, O’Neill and his son-in-law Danny Pyle, who married O’Neill’s daughter Tara, are now co-proprietors.

Our Family Serving Your Family
Over the course of eight decades, O’NEILL’S has earned a reputation well beyond just that of everyone’s favorite watering hole/eatery. As it’s also been the site of untold numbers of family christenings, communion gatherings, confirmation parties, birthday parties, anniversary parties, retirement parties, and unfortunately, funeral luncheons, O’NEILL’S itself is a reflection of the life of a community, and of the strong bonds forged that enable a community to thrive for generations upon generations. It’s also been the site of numerous fundraisers and charity events for those unfortunate times when the community has found itself in direst need, particularly in the days following 9/11.

Since its heart and soul are the generations upon generations of families for whom it’s become a treasured gathering place, O’NEILL’S was especially proud to celebrate its 80th Anniversary on December 4, 2013 with a grandiose and festive alumni and customer appreciation reunion. Here’s to many more such gatherings in the years to come…

Family owned and operated for 83 years!