FIRST COLD BEER INCLUDED AFTER THE RACE AT TORTOISE & HARE

Join us and the Tortoise & Hare crew Sunday October 28th for their 5K charity event in Van Cortlandt Park. Walk, run, jog or skip. $25 donations for participants, all proceeds go to Morgan Stanley Children’s Hospital. All other donations accepted. Slow and steady wins the race! 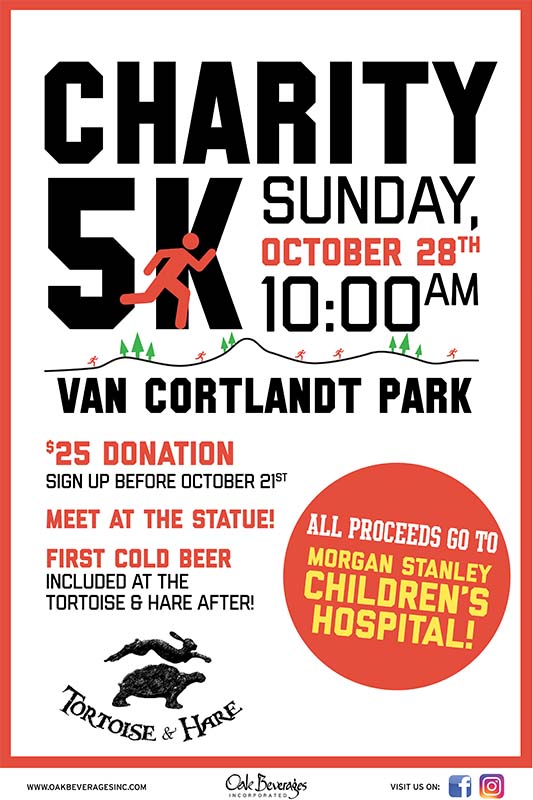 “I have been to this new neighborhood place a few times. Each time I’ve been there with friends and we were never disappointed. The service is great, the beers were ice cold and the food was Delicious!!! The owners are very friendly and always there to greet you and chat.” TripAdviser reveiw

An Irishman and a Riverdalian open a bar …

This is not some opening line for a corny joke — for Anthony Darcy and Christopher Vega, it’s reality.

The two close friends met four years ago, working long hours behind bars making drinks and washing glasses. Now the duo have launched their own business, Tortoise & Hare, which officially opened on June 2.

The bar pays homage to Van Cortlandt Park, as it is named after the statue that directly faces the establishment.

The space, charmed by original woodwork and a large fireplace, is still quite unfinished. But last Thursday afternoon, a dozen patrons had no problem enjoying their drinks amidst the unpacked boxes and unhinged picture frames. One proud mother even climbed onto the counter-top to help clean and organize shelving units. full story