A hybrid of ale & lager, Sam Adams ’76 is a fantastic session beer

A hybrid of ale & lager, Sam Adams ’76 is a fantastic session beer.

It might be hard to imagine an ale and a lager meshed together in a single beer. Especially since beer is pretty divided into one of those two categories. As it turns out, a fusion of the two styles can be pretty amazing as we just learned with Sam Adams ’76.

The brewers at Boston Beer Company used two active fermentation’s, one for a lager and one for an ale to create Sam Adams ’76. The idea is to blend the “fruitiness” of an ale with the smoothness of a lager. Sound a little odd? We thought so too.

The year of experimenting (around 60 iterations according to the brewery) was well worth it. Sam Adams ’76 is one of the best session beers we’ve tried in a long time. ‘76 pours a light gold-straw flavor and looks almost creamy at first splash. Imagine something like a pale ale brewed with Cascade, Citra, Mosaic, and Simcoe hops blended with a crisp lager. Yeah, it’s hard to piece together that flavor. That’s why… full article at Beer Street Journal

Samuel Adams Sam ’76 is a revolutionary new beer that is an unmatched combination of refreshment, craft flavor, and aroma. 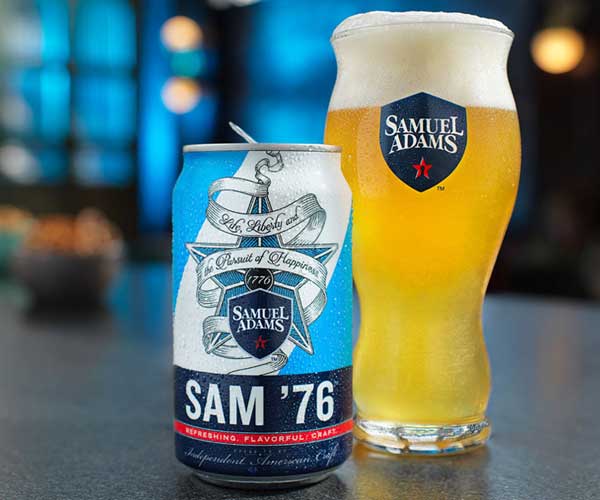 Samuel Adams Sam ’76 is a revolutionary new beer that is an unmatched combination of refreshment, craft flavor, and aroma. By experimenting with both lager and ale yeast strains, our brewers developed a unique brewing process that takes two active fermentation’s and blends them together to create a deliciously harmonious result. This process delivers a distinct flavor that showcases the slight fruitiness of an ale with the balanced drink-ability and smoothness of a lager. So whether you’re tailgating, watching the game, or headed to a party with friends, Sam ’76 can be your go-to beer.

STYLE
Union of Lager and Ale