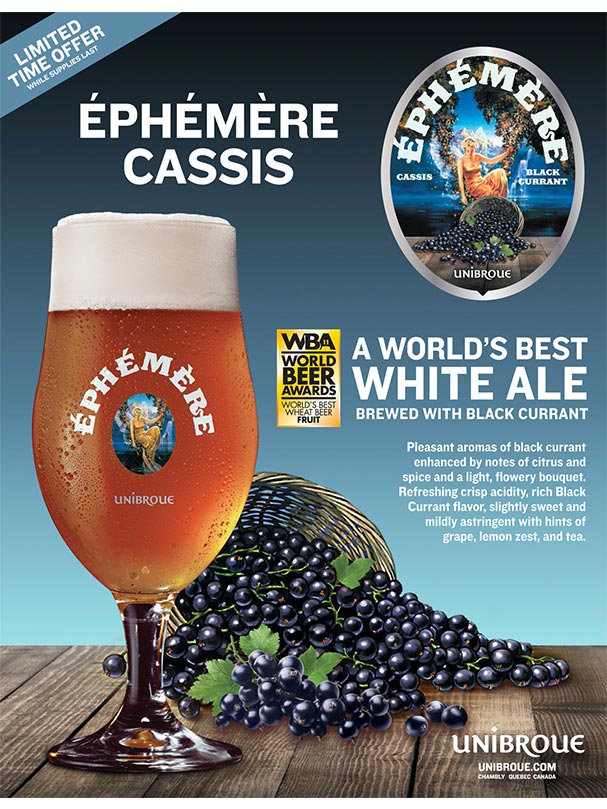 North America (June 17, 2019) – Unibroue has announced the return of its Éphémère Cassis (Black Currant Éphémère) to the United States this summer for the first time since 2011.

Available only for a limited time on tap and in seasonal mixed six-packs, this 2011 World Beer Awards winner for Best Fruited Wheat Beer is guaranteed to refresh and revitalize the senses and is perfect for the summer season.

Upon first sip, the palate is met with refreshingly crisp acidity, sumptuous black currant flavor, delicately sweet and balanced astringency with hints of grape, lemon zest and tea. A study in pleasing contradictions, Éphémère Cassis is rich in flavor and color yet not too heavy, dancing a perfect middle-ground in texture; refreshingly bitter yet gently sweet, and piquantly carbonated while retaining a body worthy of exploration. Each sip finishes cleanly on the palate, beckoning for the next.

Brewed since 2001, the Éphémère series features seasonal ales designed to highlight a seasonal fruit within the context of a refreshing, lightly spiced white ale. The label depicts a fairy, an ephemeral being long associated with fruits picked at the peak of ripeness during each harvest season. First appearing at the turn of the millennia, the spirit of Éphémère has been found within a variety of seasonal fruit ales such as apple, cranberry, blueberry, raspberry and peach. These versatile ales work wonderfully as standalone refreshers, meal time pairings, or as lighter dessert treats.

The beer is available in the U.S. on draft and as part of a seasonal variety six-pack while supplies last. Use the Unibroue Finder tool to find this and other Unibroue beers that are available near you.

Éphémère Cassis with Black Currant is available now as a limited release while quantities last.

Unibroue is headquartered in Quebec, Canada. From the very beginning, it has carved out a special niche in the beer world with top-quality products and a brand rooted deep in Quebec culture. It made history by becoming the first North American brewer to use a brewing method inspired by the two-centuries-old tradition developed by Trappist monks in Europe – particularly Belgium. Over the years, Unibroue has remained faithful to its origins even as it has grown to become an icon of the brewing world. Unibroue products take you on a journey filled with legends and fabulous tales.

From the very beginning, we have carved out a special niche in the beer world with top quality products and a brand rooted deep in Quebec culture. It made history by becoming the first North American beer maker to use a brewing method inspired by the two-centuries-old tradition developed by Trappist monks in Europe—particularly in Belgium. Over the years, we have remained faithful to our origins even as we have grown to become an icon of the brewing world. Our products take you on a journey filled with legends and fabulous tales.
At Unibroue, we create unique-tasting craft beers using traditional brewing methods.

OUR KNOW-HOW
To craft our beers, we draw inspiration from the great brewing traditions developed over the last two centuries by Trappist monks in Europe—particularly in Belgium. Our beers preserve all their protein and part of their yeast, making them truly worth savoring.

THE ART OF BREWING
Our beers are unlike any other product on the market, and no two are alike. Discover our unique brewing methods which convey our beers’ peculiar character and personality.